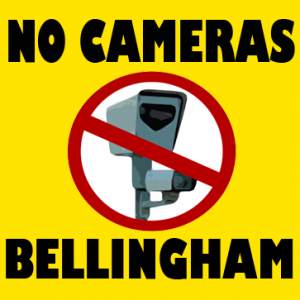 (Arrive at 6:30 if possible, please encourage everyone you know that is a Bellingham Resident or Whatcom Resident to come)

On Monday, November 22nd, the Bellingham City Council will vote to install Red Light Cameras in six intersections and set up Speed Trap Cameras as well. They are contracting with an out of state, multimillion dollar corporation, American Traffic Solutions to make money off us under the guise of safety.

Young Americans for Liberty have been working on this issue since September when the issue was first presented. On September 27th the Council voted unanimously to hold Public Hearing because of overwhelming public interest. Bellingham government replied to an email from a concerned citizen inquiring to date of Public Hearing on November 10th denying Public Hearing, claiming that its 100% legal for them to revoke us the right to a Public Hearing on Red Light Cameras after voting to give us one.

All you have to do is show up! It is important to show that the people of Bellingham are against Red Light Cameras and want their opinion to be represented. If you would like to voice your opinion to the Council I suggest writing something up in advance to best utilize the 3 minutes they allow us to speak. Feel free to show your disgust once they vote to install these intrusive Red Light Cameras, it’s your right and your duty as a misrepresented citizen of a “so called” democracy. Let them know you BOOO! at their Yes Vote on Red Light/Speed Trap Cameras.