By SeaTrafficCamera, a grad student at the University of Washington. This study was part of a paper that she wrote on traffic cameras. She conducted an informal study and filmed 35 yellow lights in 22 intersections around central Seattle, mainly on Capitol Hill, Madison Valley, Montlake and the University District.

After reading about the practice of shortening yellow light durations and discovering that it was done in downtown Seattle, I began to wonder what the status was of yellow lights in other Seattle neighborhoods. How long did they last? Were they synchronized with each other? Were the yellow lights of monitored intersections indeed shorter than non-monitored intersections? Was there a radical yellow light time difference between neighboring intersections? After sifting through empty pages of secondary research I decided to roll up my sleeves and answer my own questions. In July 2010, I conducted a very informal investigation of four Seattle neighborhoods: Madison Valley, Capitol Hill, Montlake and the University District: 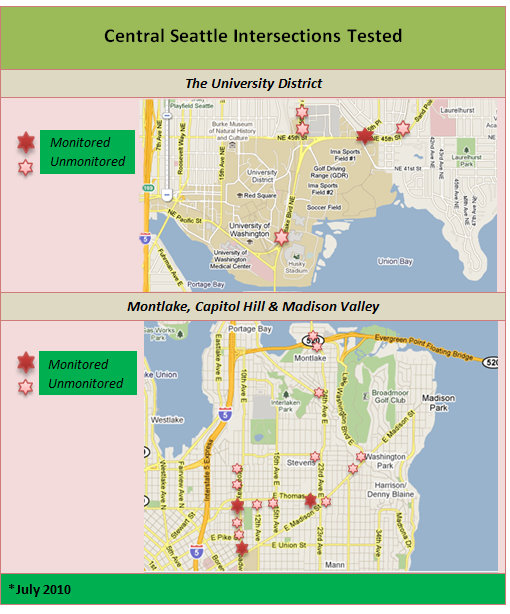 I chose these neighborhoods mostly because I live conveniently close by, but also because they maintain fairly heavy traffic flow throughout the week and contain some of the city’s most notorious red light cameras, namely NE 45th and Union Bay Place NE. This five-way intersection came under fire when a traffic judge declared its red light camera set-up illegal on the grounds that traffic cameras are restricted to where two arterial roads meet. However, the Seattle Attorney’s Office disagreed with this ruling and continued to let the intersection’s cameras write an average of 16 tickets a day. In all I timed the durations of 35 yellow lights in 22 intersections using video frame computer technology. The following compares each intersection’s individual yellow light durations:

When analyzing the data collected, I used the Institute of Transportation Engineers (“ITE”) chart of recommended yellow light minimum durations as a safety benchmark:

As Seattle’s speed limit is 30 miles per hour on arterial streets, I mainly used ITE’s corresponding speed minimum of 3.5 seconds as my benchmark time. Of the above intersections; E John & 10th, Broadway & Pine and NE 45th & Sand Point Way NE are tied for having the shortest average yellow light duration of 3.3 seconds, which is 0.2 seconds under ITE’s recommended minimum of 3.5 seconds in a 30 miles per hour speed zone.  On the other hand, Madison & Lake Washington Blvd and Madison & Martin Luther King are tied for having the longest average yellow light duration of 3.9 seconds, which is 0.4 seconds longer than ITE’s 3.5 second minimum. Of all the 22 intersections tested, only five intersections met ITE’s 3.5 minimum. In general, the lights in each intersection are synchronized with each other and those of the neighboring intersections, but not with the intersections in other neighborhoods as illustrated by the following chart: 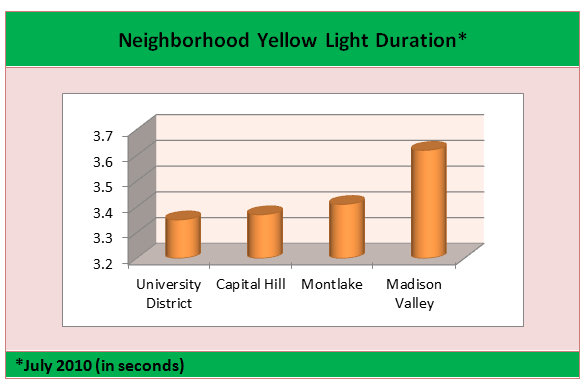 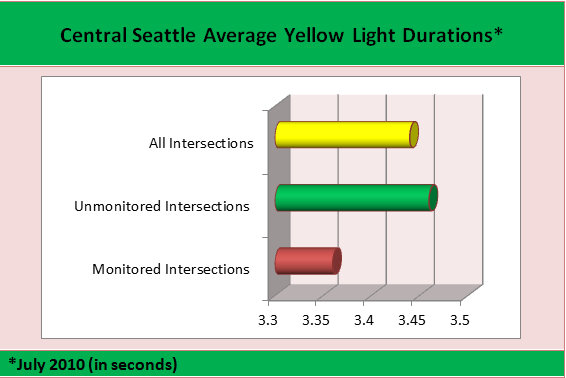