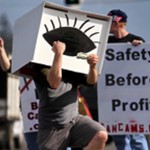 We are citizens that think law enforcement should be about protecting people and property, not making money. Ticket cameras are all about money, not safety. Study after study shows that the cameras actually increase collisions. The politicians won’t get rid of them voluntarily, so that’s why we are here.

A few years ago we had initiatives in most of the ticket camera cities in Washington to end the ticket cameras. While we were successful in persuading some of the cities to remove the cameras (or never install them), the supreme court eventually ruled against us, and said that ticket cameras were not subject to initiative. So there will be no more city initiatives. But that doesn’t mean we will stop spreading the truth about them and making sure people don’t get scammed by them.

We have a great network of supporters and other groups in many other states that are very helpful in getting the truth spread about this fraud system that is being sold to the public as a safety tool.
If you have any helpful information that you would like to share please contact us
Thanks!